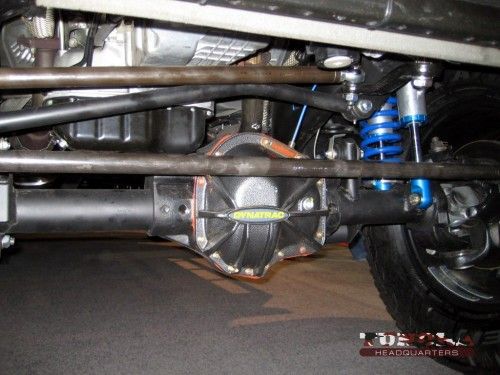 At this year’s SEMA show, Jason encountered a very interesting custom Tundra put together by the people at Off Road Evolution. Off-Road Evolution is one of the premier off-road rig builders and 4×4 parts fabricators and suppliers on the West Coast. The truck was sponsored by Falken Tire, and perhaps the most unique aspect of the entire vehicle was the fact that the front end had been converted to a Dynatrac 60 series solid axle setup – perhaps the only Toyota Tundra currently out there sporting this particular modification.

I had the chance this week to speak with Mel Wade at Off Road Evolution and discuss some of the details surrounding the truck’s build process. I asked Mel if there had been any particular challenges associated with the front end axle swap. He told me that the installation had been largely trouble-free, with the only real sticking point being the vehicle’s stock magnetic induction rings for the speed sensors at the front wheels. This particular issue had been solved by going to a Dynatrac solution. The steering box also had to be custom made in order to accommodate the new suspension setup.

The front axle wasn’t the only one to be replaced on the Falken Tire Tundra – the stock rear axle also got the boot, replaced by another Dynatrac axle. The reasoning behind the decision to do both axles instead of just the front didn’t have anything to do with a perceived weakness of the stock Tundra unit – Mel himself said that the Toyota axle is very strong – but rather the fact that the front axle pushed the vehicle’s track just a bit wider than stock. Running the same brand of axles front and rear avoided the need to use wheel adapters to even things out.

Some of you are probably reading this post and wondering why someone would go through all of this trouble to replace a Tundra’s perfectly serviceable independent front suspension with a solid axle. From an off-roading perspective, a solid front end offers a much stronger and more capable platform for trail driving, rock-hopping and mudding, providing better articulation and wheel travel compared to an IRS setup. Mel says that the Falken Tire Tundra offers 14 inches of wheel travel up front and 10 inches in the rear, which is very impressive. 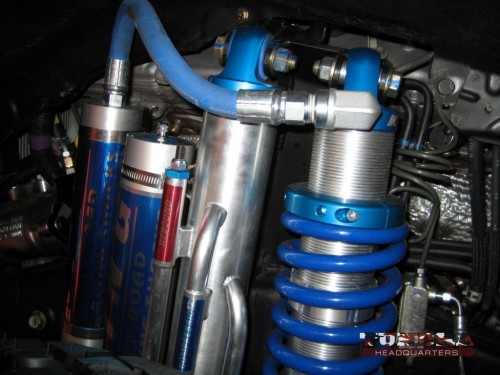 Equally impressive is the ride quality in the tall Tundra. Some solid front axle setups are known for less-than-stellar handling on the pavement, but the team at Off Road Evolution dialed out the harshness thanks to the use of King Off-Road Racing external bypass coilovers that feature a wide range of different settings for both street and trail use. The vehicle also features Off Road Evolution’s bolt-on Rock Sliders for additional chassis protection.

Off Road Evolution are no strangers to solid front axle swaps, and they say that they have been getting a good volume of calls about the potential to adapt what SEMA attendees saw on the show truck into a full-fledged kit. The company currently offers the brackets needed to do the swap and could walk a shop through the process, but they foresee a full kit becoming available within a year’s time based on the amount of interest the project has generated. 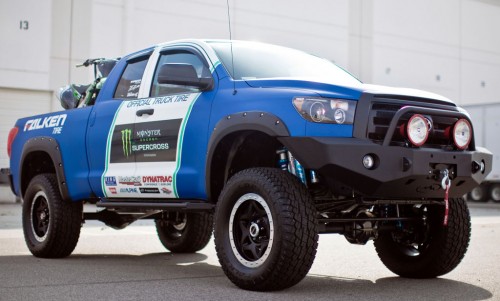 In the meantime, the Falken Tire Toyota Tundra can be seen on the AMA Monster Energy Supercross circuit, of which Falken is a major sponsor. The truck is making the rounds of each AMA event this year, and it also appears in a number of television ads for the brand in partnership with Ryan Villopoto’s #2 Monster Energy Kawasaki entry as a team sponsor.